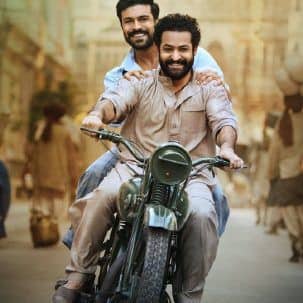 RRR Latest Poster Published: Rajamouli’s upcoming film Triple R (RRR), the director of the Bahubali series, has been rumored for a long time that it will not be released this year. The second wave of the corona virus epidemic has thwarted the makers of Triple, which is why it will be released next year. The audience was quite disappointed with the news about Triple R as they were eagerly waiting for this photo.

The producers have clarified through a poster centering on the dominance of this kind of news in the media. At the time of release of this poster, the makers have made it clear that they will release their film on the occasion of Dussehra this year. Most of the work on the film has been completed and the rest of the work will be finished soon.

The makers of the film tweeted the poster, saying, “With the exception of two songs in the film, the shooting of Triple R is over. The dubbing of the film in two languages ​​has also been completed. Dubbing of other languages ​​will also be done soon.

Running fast ??
With the exception of two songs, our shooting is over. #Rrrmovie7 stars 9999 & On Twitter Completed dubbing in 2 languages ​​and will finish the rest soon. ?? pic.twitter.com/6g1h5yTQhK

RRR to release all over the country together

Triple R starring Junior NTR and Ramcharan will be released all over India simultaneously. People are expecting a lot from Rajamouli’s Triple R as it is his first release after the Bahubali series. The film also stars Bollywood actors like Ajay Devgn and Alia Bhatt. Both have also finished shooting their part. Until the end, we are told that Triple R will clash with Ajay Devgn’s Maidan on the occasion of Bonnie Kapoor-produced Dussehra.